Home » News & Applications » Product News » Belt-Driven Versus Ball Screw Actuator: Which Is the Best Choice for Your Application?

Belt-Driven Versus Ball Screw Actuator: Which Is the Best Choice for Your Application?

Today, linear actuators play a significant role in a broad range of advanced automation applications. From the simple movement of raw material in a manufacturing environment to advanced robotic systems for the precise positioning of a machine tool, linear actuators provide fast, efficient and repeatable motion for a variety of tasks.

Two of the most widely used types of linear actuators are belt-driven and ball screw driven actuators. Both types are employed in similar applications, but differ significantly in function especially when it comes to the drive mechanisms. When choosing a linear actuator the advantages and disadvantages of each type must be carefully considered to provide the best results for a particular linear motion application. A belt-driven actuator converts rotary motion to linear motion by means of a timing belt connected between two pulleys at either end of the drive. The timing belt is typically constructed of a fiber-reinforced elastomer for light duty applications or a steel-reinforced polyurethane belt for more demanding requirements. The belt contains teeth that mesh with the pulleys to efficiently transfer torque and prevent slipping. The belt drive is enclosed within an aluminum body with the load carrying carriage riding on top along rails. In contrast to a ball-screw actuator, the driveshaft is oriented perpendicular to the side of the actuator. Below are six factors that highlight the advantages and disadvantages of both belt-driven and ball screw actuators:

Belt drive systems are probably best recognized for their ability to travel long lengths.  In general, longer travel distances can be achieved more cost effectively with a belt drive than can be accomplished with a similar length ball screw driven actuator. However, although these systems are commonly found in applications requiring a stroke length of 10 to 12 meters, as they reach longer lengths, issues start to arise with belts sagging as tension cannot be maintained across the whole length of the system.

Historically, the issue with a screw drive system is the difficulty in reaching longer stroke lengths. As the length of the screw increases, the permissible speed decreases, due to the tendency of the screw to sag under its own weight and experience whipping. While ball screw actuators are commonly found at lengths of 1000 mm or less, the can be provided in lengths of up to 5.5 or 6m using pairs of bearing blocks to support the screw and stop any whipping effect at higher rotation speeds.

As far as load carrying capabilities, ball screw systems win out, offering the most output force. Ball screw actuators can deliver output forces up to 13,100 pounds, while belt drive load capacities will typically top out at around 2,000 lbs.

For belt driven actuators to handle higher load/thrust demands requires significantly thicker belts. The belts are also susceptible to shock loads, although this concern can be mitigated by the careful selection of belt materials which can add strength at the expense of elasticity.

Ball screw driven actuators are the preferred choice for high acceleration and high thrust demands, as the belt drive pulley is vulnerable to slipping at the rotor under such repeated demands. However, when it comes to speed, the whipping nature of the system limits their speed rates to approximately 2.5 m/s. As mentioned above, bearing blocks can provide additional rigidity by reducing the unsupported length of the screw, allowing a ball screw actuator to reach higher speeds at longer lengths.

Conversely, belt drives are not hindered by the whip effect, allowing them to reach higher speeds than ball screw actuators. Speeds for most belt drive actuators can range from 4 to 15 m/s and accelerations can range from 10 to 50 m/s2.

The primary drawback of belt driven systems is that belts stretch. Even steel-reinforced belts, which are used by most system manufacturers, will eventually experience some elongation, which degrades repeatability and travel accuracy. That, being said belt drives can still achieve linear accuracy on the order of .001″ / ft.

In some cases, the direction in which the actuator is mounted will dictate which drive mechanism is best. Both belt and ball screw drives are suitable for horizontal mounting orientations, but applications that require vertical mounting need more careful assessment.

While every system that is moving a load vertically needs built-in safety mechanisms, ball screw drives are often seen as safer than belt drives for carrying vertical loads. This is because ball screws, by nature of their design will prevent backdriving if there’s a brake failure or other damage to the system. When a belt drive actuator is required in a vertical application, an external braking system should be added to alleviate safety concerns.

Both ball screw and belt drive actuators require that the guide system be lubricated periodically, however, screw drives have an additional components, the screw and nut that must be monitored for proper lubrication to ensure long life and smooth operation.

Belt-driven actuators operate at very high efficiency and are extremely reliable with fewer moving parts, thereby making for less labor intensive maintenance. Despite this, adequate tension of the belt is critical in order to ensure proper transfer of torque, and re-tensioning of the belt at periodic maintenance periods is usually necessary.

Both belt drives and ball screw drives have performance benefits. Belt-driven actuators remain the better choice for applications with lower loads, especially where higher speeds and longer stroke lengths are needed. Ball screw driven actuators are the better choice in applications where high loading and/or thrust forces are required, along with highly accurate positioning. 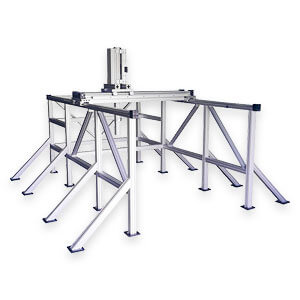